Scuole Grandi of Venice or “Great Schools” (singular: Scuola Grande), were confraternity or sodality institutions.  They were founded as early as the 13th century, as charitable and religious organisations for the laity.

Underneath the Great Schools, were the numerous “Scuole Piccole” (Minor Schools) and “Guilds”; that included specific trades and craftsmen, merchants and those catering for foreign nationals, resident in Venice.

Confraternity:  is generally a Christian voluntary association of lay people, created for the purpose of promoting special works of Christian charity or piety and approved by the hierarchy of the Church.

They are most common among Roman Catholics, Anglicans, Lutherans and the Western Orthodoxy.

Archconfraternity: is when a confraternity has received the authority, to aggregate itself into groups erected in other localities.

Sodality: is a form of the “Universal Church” expressed in specialised, task-oriented form as opposed to the Christian church in its local, diocesan form which is termed modality.

Laity in religious organisations, consists of all members who are not part of the clergy.

ABOVE: Scuola Grande di San Rocco and church to the right.

Development.  The earlier ones had developed from the “Scuole dei Battuti” (“of the Beaten Ones”), penitential self-flagellation brotherhoods, founded in the Middle Ages; dedicated to charitable and spiritually good works.  Some have suggested that they were more focused towards devotion and solidarity.

The Scuole Grandi, proved to be one of the few outlets for non-noble Venetian citizens to control powerful institutions.  Their activities grew to encompass the organisation of processions, sponsoring festivities, distribution of money, food and clothing to poorer members, provision of dowries to daughters, burial of paupers and the supervision of hospitals.

Unlike  the numerous Minor Schools (Scuole Piccole) and the trade Guilds, the Scuole Grandi included persons of many occupations, although citizenship was required.  Citizens could include persons in the third generation of residency in the island republic, or persons who had paid taxes in Venice for fifteen years.

Another example of the role of these institutions, was in the history and development of music.  Inside these Scuole at the beginning of 16th century, developed the first groups of bowed string instrument players named “Violoni“.

ABOVE: Brothers kneeling in front of St John the Evangelist.

Even though some of the Scuole Grande still fulfil their traditional role, they are now also open for the public.  They can be visited as a museum and are used to host events, exhibitions, concerts or seminars.

By 1552, there were six Scuole Grandi and in 1767, a seventh was officially recognised by the Council of Ten and were unique to Venice:

They erected monumental buildings designed by famous architects, close to the church of their patron saint and often with an affiliated hospital.  They were wonderfully decorated, filled with great art, sheltered relics and often patronised musicians and composers.

If you love Venetian history and art, you should certainly make a point of visiting the Scuole Grandi.

In date order they are:

Scuola Grande dei Carmini was founded in 1767, the last of its kind to be recognised as a Scuola Grande by the Council of Ten.

Underneath the Great Schools, the Scuole Piccole”(Minor Schools) and Guilds; that included specific trades, artisans, merchants and foreign nationals, resident in Venice.  They formed the vast majority of schools, ranging from large, politically influential guilds like the glass-makers and arsenal workers; down to the humble fruiterers’ guild, whose members had the privilege of annually presenting the Doge with their finest melons.

Confraternities for foreign residents, helped integrate them into Venetian society; perhaps the most notable are San Giovanni degli Schiavoni, (for the Croatians) and San Giorgio dei Greci, (for the Greeks).

From the 13th century; to the fall of the Republic; there were around 925 of these corporations and formed the backbone of everyday life in Venice.

This term refers to the constitutional process, started with the  Ordinance of 1297; by means of which membership of the Great Council of Venice, became an hereditary title.

This 1297 Ordinance, marked a significant change in the constitution of the Republic; since it was the Great Council that had the right to elect the Doge.  This resulted in the exclusion of the working class and some minor aristocrats, from participating in the government of the Republic.  Formerly provisional, the Ordinance later became a permanent Act; with a few exceptions.

One of the most remarkable facts about the Republic of Venice is that the people, completely shut out of power, apart from a few minor riots, never seriously revolted in the 500 years that followed.

By and large, the Venetians lived much better and with more security than their mainland counterparts.  The secret of Venice’s popular success, was a precocious sense of social justice.

Venice’s merchant aristocrats, understood that the best way to retain their monopoly of power and their profits was to devote themselves to the public good: as the only real privilege a patrician had, was to serve the state.

All the classes mingled together in the streets and at festivals, with no signs of deference beyond the requirements of common courtesy.  There were even laws that doubled the punishment when a patrician committed a crime against a commoner. Europe’s other aristocrats thought their Venetian cousins were crazy.

The most important factor in maintaining social stability was that patricians actually encouraged co-operative, independent guilds and confraternities, just when many European nobility were trying to limit them.

In fact, when Napoleon conquered Venice ending the Republic; it was the ordinary people who were not enamoured with the delights of the French Revolution.

One of the first things Napoleon did was suppress the scuole system.  To his ideal of a modern, central government, they seemed like medieval anachronisms.  It was like pulling the rug out from under the people, who suddenly lost their security and chance to control their own affairs.  It was not long before a third of the Venetian workforce, had to turn to the modern, central government dole!

The Scuole Grandi of Venice – Membership and Responsibilities

Unlike the rigidly aristocratic Venetian governmental Great Council of Venice, which for centuries only admitted a restricted number of noble families, membership in the Scuole Grandi was open to all citizens and did not permit nobles to gain director roles.

The Scuole Grandi proved to be one of the few outlets for non-noble Venetian citizens to control powerful institutions.  Their activities grew to encompass the organization of processions, sponsoring festivities, distribution of money, food and clothing to poorer members, provision of dowries to daughters, burial of paupers and the supervision of hospitals.

During the Middle Age, each school had its own regulation, named “mariegola” (mother rules).  Their autonomy was lost during the Renaissance, when the institutions were subjected to a specific Magistracy that ruled the office of the leaders and oversaw the drafting of regulations.   After a process of secularisation, charities lost their Christian identity and were absorbed into the Venetian structure of the State.

The Poverty Laws approved in 1528-29 entrusted from the State to the Grandi Scuole system, all the charitable and social activities, like: handouts, drugs, burials of needy persons, hospices for widows and children, food and lodging for pilgrims, brotherhood for prisoners.  The State kept for itself a residual role in social justice, uniquely related to any negative element derived from of poverty.

The Scuole Grandi of Venice – Structure and Physical Layout 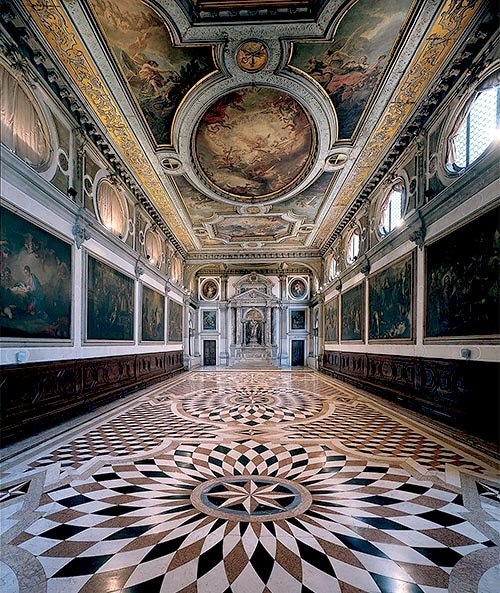 The Scuole Grandi were regulated by the Procurators of Venice, through a complex balance of elected offices, that mirrored the structures of the Republic.

Each scuola was governed by elected lay officials.  It was one of the few possibilities for non-noble Venetian citizens to control powerful institutions.  A wide range of citizens with different backgrounds and professions joined these confraternities.  Membership was limited to a maximum number and it was open to men and women. Vagrants, beggars, prostitutes, and other social outcasts were however excluded. The hereditary patricians and clergy were excluded from full membership, but they often played an honorary role.

The official statutes were written on precious paper in the “mariegola” (translated: mother-rule) and beautifully decorated. The document covered not only institutional aspects of the confraternity, but also behavioral aspects as well.

Members voted in the larger Capitolo, which in turn elected 16 members to a supervisory Banca comprising: a Chief Officer, a Vicario (first deputy), a Guardian da Mattin (director of processions), a Scribe and Degani (twelve officers, two for each of six districts).

A second board, known as the Zonta was meant to examine the accounts of the Banca.

Typically the main building consisted of an androne (meeting hall), for the provision of charity; the upper floor contained the salone (salon), used for meeting of the Capitolo and a smaller albergo, used for meetings of the Banca and Zonta.

They often sheltered relics, commissioned famous works of art, or patronised musicians and composers.  They had a church close by with their patron saint and often an affiliated hospital.

CLICK ON THE LINKS BELOW FOR SEVEN SCUOLE GRANDI POSTS: