“Mouths of the Lion” refers to the famous “Bocche dei Leone”, that the Venetian Republic used as a means of collecting complaints or denunciations; against other citizens, or the authorities.

Essentially, they were an early form of “Post-box”, embedded into the wall of churches or certain state buildings; giving Venetian’s the means by which they could secretly and securely denounce another, if they were suspected of breaking the law.

TEXT: Secret denunciations against anyone who conceals favours and services or will collude to hide true revenues from them

Bocche dei Leone  (sing: Bocca di Leone) were once found in every district, often for specific types of complaint; such as general law breaking, public safety and health issues and most seriously, plotting against the state.

It is often thought that the denunciations were anonymous, but this was not the case.  A note had to be signed and also required to include the signatures of several witnesses to their good character.  Accusers knew that they would be given the punishment of the crimes, if they reported falsely.

Anonymous accusations were meant to be burnt, but the information so provided could be acted upon, if it involved matters concerning state security.  There was a financial incentive for citizens to snitch on one another, as those making a denunciation were rewarded for their efforts, if their information proved correct.

After the fall of the Republic, Napoleon ordered them taken down or destroyed, to prove that French law now prevailed; but fortunately a few of these curiosities can still be seen today, around the city.

Bocche dei Leone were first erected in Venice after the attempted coup against the state, by Baiamonte Tiepolo in 1310.  The name derives from the reliefs of white marble or stone that were carved into an image of a lion’s face; signifying the Lion of St. Mark, the symbol of the Venetian state.  Alternative designs were of a “bad face” expression.

In place of the mouth there was a hole or slot, to insert paper documents with the secret complaints.  Behind these plaques inside the building, there was a small wooden box to securely collect all the complaints.  The keys to these boxes were kept by the Magistrates and only the heads of each district (sestieri) could open them.

LEFT: Box on the back of the Bocca dei Leone in the Sala della Bussola, Palazzo Ducale

The complaints could relate various types of crimes including the non-compliance to health, blasphemy or tax evasion.   They were distributed in every district, near the Judiciary places, the churches or the Doge’s Palace and were used to collect information, reports or accusations, against those who did the various crimes.

It was not easy to accuse someone without proper foundation; such as on grounds of hatred or envy.  There was a sophisticated process through which anonymous denunciations were considered.  Serious evidence and investigation were always needed before any action was taken.

In 1387 the Council of Ten ordered that anonymous allegations sent, without signature of the accuser and without reliable witnesses for the prosecution on the circumstances reported; were to be burned without taking account of.

In 1542, it was decreed a law that established the acceptance of complaints were quoted, only if at least three witnesses were present at the event.

The most dangerous secret denunciations were those who were presented with charges of treason and conspiracy against the State; in which case the sentence was the death penalty, exile, or relegation.

The curiosities were created to preserve peace in the Serenissima, to avoid internal struggles and attempts to seize power against the state.

The Council of Ten scrupulously applied the law established by the investigating officers (“Avogadri dello Stato”).  It was necessary to conduct a thorough investigation to establish “truth, justice and clarity”.  No one should be judged on the basis of suspicions.

Without the system of the “mouths of the lion” and their secret complaints, many crimes would have never come to the attention to the state authorities.   It is probable however, that some innocent people were falsely imprisoned.

A few remain to be admired.  There are two at the Palazzo Ducale and one on the wall of the church of Santa Maria della Visitazione, the Zattere in the Dorsoduro district, on the Church of San Martino near to the Arsenale in Castello and San Moise in San Marco district.  Lastly there is one on the gate of the Law School of the University of Venice, although this last one may not be the original. 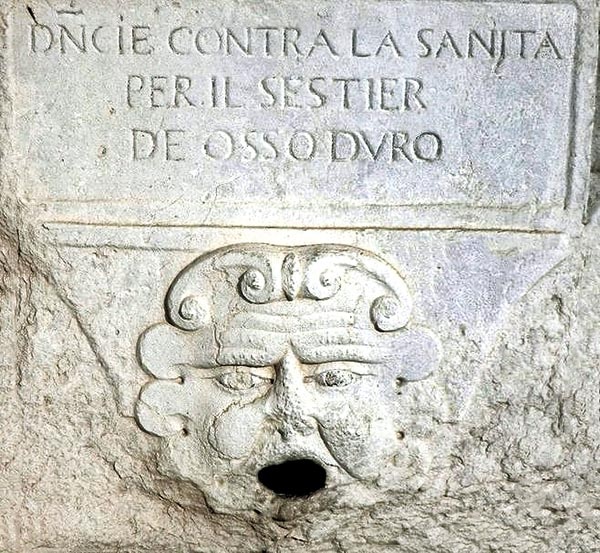 ABOVE:  Church of Santa Maria della Visitazione,  Denunciations against health of the district of Dorsoduro

ABOVE: Church of San Martino, near to the Arsenale, Castello

Mark Twain, who for some reason had no love for Venice, typifies the popular fiction of the “bocche dei leone” as a wretched symbol of the malevolence of the Venetian Republic.

In his Innocents Abroad, he writes:

“These were the terrible Lions’ Mouths. … these were the throats down which went the anonymous accusation thrust in secretly in the dead of night by an enemy, that doomed many an innocent man to walk the Bridge of Sighs and descend into the dungeon which none entered and hoped to see the sun again”.

A quote about Montesquieu (a great french political philosopher of the Enlightenment).  “For all that, the procedure had such an evil reputation that when someone joked to Montesquieu that he was being watched by the Ten, he immediately packed his bags and left town“.

Click on the link to see my other posts in the category of “History and Architecture”: HERE